Single Stock Retirement Plan – Scam or Once In a Lifetime Opportunity? 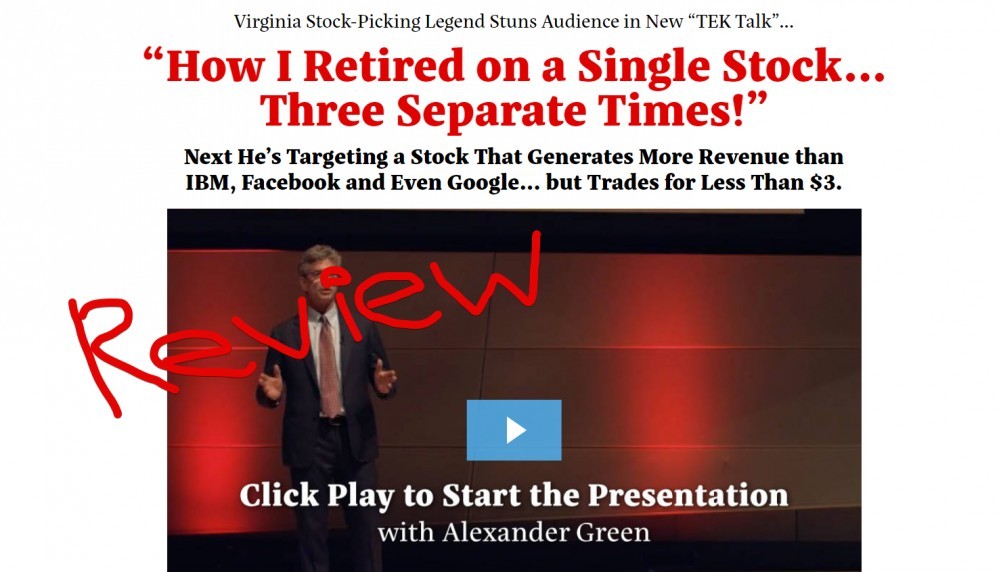 Is this whole “Single Stock Retirement Plan” thing a scam by The Oxford Club?

I’m guessing you must have received one of their emails for this (supposedly) incredible investment opportunity…. but of course you are a bit hesitant to believe in things when they sound too good to be true, as you should be.

Is this really your lucky day?

Will you really be able to retire comfortably off of this one stock investment?

Is this really the next Amazon or Microsoft opportunity?

The answer: NO… NOT EVEN CLOSE.

You guessed it!… This is another very misleading promotion that is massively over-hyped.

In this quick review I’ll be going over what you are really getting into here. I’ll go over what this “secret” stock is and why it is not the incredible opportunity it is portrayed as being.

The teaser is put on by Alexander Green, who is a chief editor at The Oxford Club, which is a company that publishes many different financial newsletters.

He claims that this unknown opportunity “Generates More Revenue than IBM, Facebook and Even Google… but Trades for Less Than $3”.

Sounds pretty good to start, right? But then again it also reminds me of other incredibly misleading investment opportunities that have been teased in the past, such as “Congressional Checks” and “Federal Rent Checks“, which have received tons of complaints.

And better yet, it is “undiscovered”, at least according to him.

This company is involved in…

And has deals with some pretty big well-known companies such as Cisco, Microsoft, Intel, Sharp, IBM and even Apple.

According to Mr Alex, it has “multimillion-dollar retirement” potential.

But… The Things He Tells You Are… Well… Misleading

Early on in the teaser he talks about all these other past investment opportunities that have made people rich… other “Single Stock Retirement Plans” so to speak.

He talks about all the money you could have made investing in Microsoft or Amazon, as if this opportunity is comparable… but it really isn’t. This is all very misleading.. 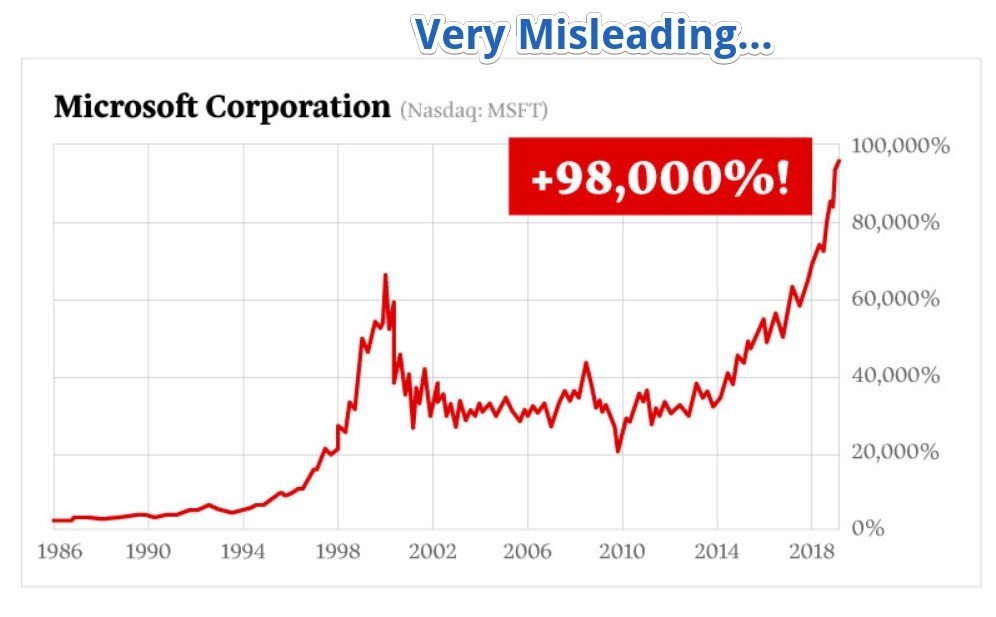 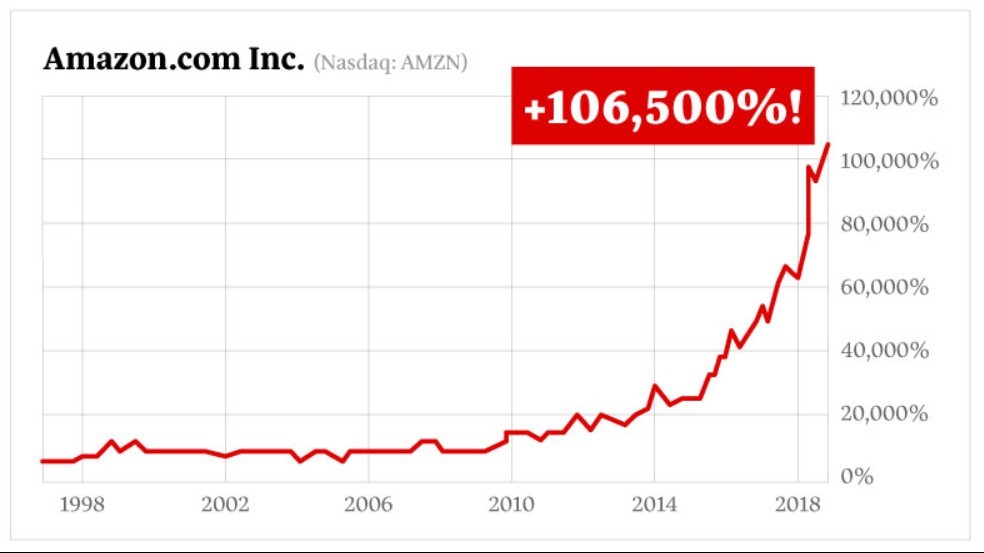 Why he is comparing this to Amazon and Microsoft I have no idea.

Why He Claims This Is Such An Amazing Opportunity

One thing Alex really makes a big deal about is the share price. He tells you that this stock is selling for less than $3, but why is this important?

What he makes an even bigger deal about is that this stock is “undiscovered”. He claims that not one in 50,000 investors know about this and it is because it goes under a “secret name”…

Now obviously this is a much bigger deal. Of course if you can get in on good investment opportunities before they become known and go mainstream, then you can really profit big. We see this sort of thing happen all the time.

People who are able to identify winning stocks before they take off are wealthy people.

What The Heck Is This Stock That Goes Under a “Secret Name”?

At this point you probably just want to know what the heck this teaser is even talking about. You already wasted a bunch of time reading through all the hype.

So I’ll get straight to the point.

This “undiscovered” company he is talking about is Foxconn, which is a massive Taiwanese electronics company that makes products for big brands like Apple, IBM and others.

They also go by the name Hon Hai, which has the ticker symbol HNHPD.

What you would have to do to buy stocks in this company is buy through an ADR, in which you would buy 2 shares per ADR.  But don’t go out and do that just yet.

Great Opportunity or Not?

Well… it’s definitely not as great as it is hyped up as being… and is something you might not want to invest in.

With a market cap close to $50 billion, these shares aren’t just going to explode in price like you are led to believe. There is little to no chance you will see a 10x increase in 10 years.

Although there is a lot of talk about the share price being under $3, this doesn’t really mean much as I discussed briefly above.

You might also be interested in hearing that this stock has underperformed the S&P 500 by a long-shot since 2008, producing only about half of the gains.

Not Many People Agree With Alex On This One

On the popular website MarketBeat.com I was able to find a survey where they asked investors what their prospects are on Hon Hai in the long term…. more specifically whether or not they think it is going to outperform or underperform the S&P 500.

As you can see below, at the time of me writing this there are over 178 votes in and the majority of people think that it is going to underperform…

And it’s no wonder that they think this. If you look at the history of this stock you would too. Like I just mentioned, since 2008 the S&P 500 has produced around double the profits than HNHPD.

There are a fair amount of people complaining on the stock market discussion website StockGumshoe that I came across, which makes perfect sense considering Alex is pushing this “Single Stock Retirement Plan” in a way that is deceptive and misleading. 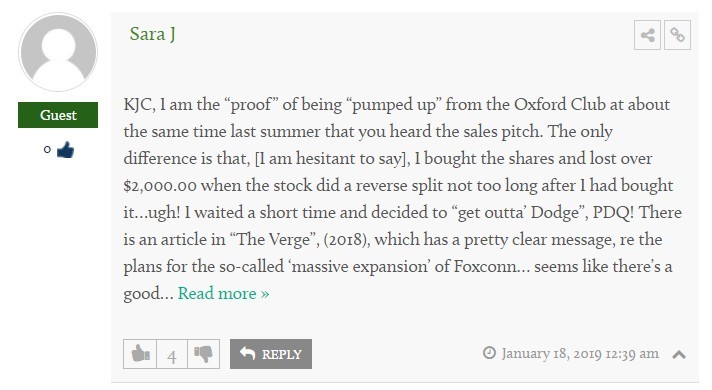 I think we can all agree that this is the type of marketing that we don’t like.

The entire pitch is filled with much misleading info.

FoxConn is opening up some plants in the US, so this will affect stock prices if everything goes as planned, but will it? As of right now they are already hitting some snags and cutting back on plants in the US.

The Point of All This

You may be wondering what the point of this whole thing is.

Why is Alexander Green trying so hard to pitch this investment choice to his subscribers?

Well… I don’t think it is too much this particular stock that is a big deal to him. The luring opportunity is what is the big deal. He wants to lure people in.

But you may be wondering… what’s the point of luring people in if he is giving this information away for free?… 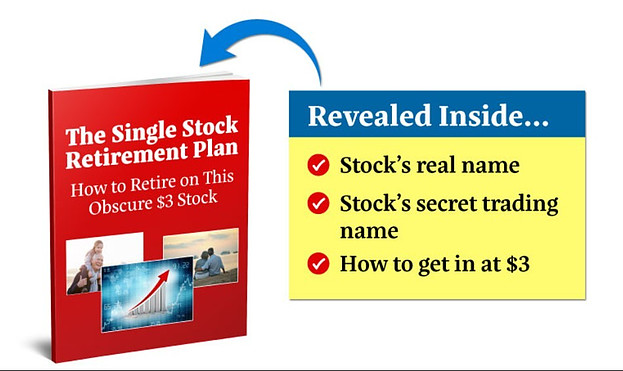 As you can imagine, there is a catch. There are a number of free bonuses that you get… BUT you have to pay to subscribe to his newsletter, The Oxford Communique in order to get all of this “free information”..

So is this really free? Is any of it free?

Whether or not you want to call this a scam is up to you. Newsletters from The Oxford Club like this tend to get some pretty bad reviews at times but you will also find good reviews out there from people who have made money based on the advice given.

That said, there is absolutely no doubt that this opportunity is promoted in a very misleading fashion and I’m sure many people will feel as if they were “suckered” into paying for this subscription pretty soon after doing so.

While it may not be a total scam because you are being provided with some real value, it is the type of product that seems to be a bit of a rip-off, at least in my opinion due to the deceptive marketing tactics used.

But anyways… I hope you enjoyed this review and found it helpful. Hopefully now you have a better idea of what you are looking at here and can make a more informed decision for yourself.