Is Pruvit a Pyramid Scheme? My Take On It

While I don’t consider this business to be a pyramid scheme I will say that there are a lot of similarities between the two. And I would also strongly recommend that you hear me out because many new distributors are mislead with the reality of this business.

Pruvit is an mlm company with a direct sales business model. They rely solely on independent distributors to do the selling and marketing of products.

The “pyramid scheme” part of this business is the mlm side of it. MLM stands for multi-level marketing and this means that distributors can recruit new distributors into the business beneath them and profit from what they do.

The products that are sold here include bars and drinks that have Ketone OS in them. The health benefits of ketones has become more widespread recently and they are riding out this new wave of popularity by selling products with this “special” compound.

The compensation plan that Pruvit has in place is pretty darn confusing, which is expected.

Of course you can make money selling Pruvit products directly but what I am looking at here is the recruitment side of the business, which of course is what makes you suspicious of this being a pyramid scheme.

When you join as a distributor you are really pushed to recruit more people into the business. They do so indirectly by giving you massive incentive to do so.

The only way to move up the ranks within the company and earn as much money as possible is by recruitment. Below I took a screenshot of the different ranks within the company and the numbers that you must achieve to make it to those ranks. As you can see, the PQV (Personal Qualifying Volume) increases slightly but not all that much as you move up, however, the TV (Team Volume) and GV (Group Volume) increase drastically. And the TV and GV both are reliant upon the sales that come from your downline. 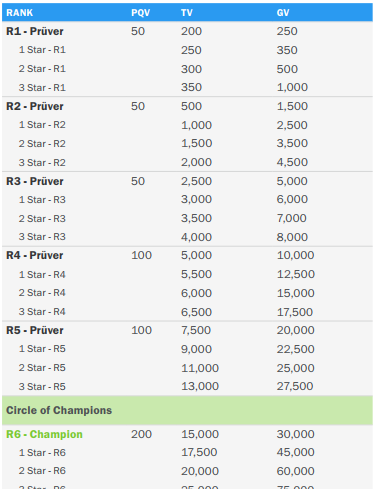 I know this may all sound a bit confusing but basically I am just proving that in order to move up the ranks you must recruit, recruit, recruit. You are forced to do so.

How This Could Be a Pyramid Scheme

In order for Pruvit to be a product based pyramid scheme it would have to push distributors to recruit too much and be overly dependent on revenue from recruitment rather than from selling products to the general public. So the big question here is whether or not this place is too dependent on such.

The requirements to move up the ranks are obviously focused on recruitment and this makes me uneasy. There is no way to move up in the company unless you either recruit more and more people in and make money off of them, or unless you miraculously get some incredible distributor in your downline that can make record sales… which isn’t going to happen.

But is it a pyramid scheme?

I don’t think there is enough evidence to really call it that. It is obviously focused on recruitment but product sales are also a focus of the company for revenue… although I would feel a lot better about this place if they would place more emphasis on it.

Conclusion On The Pruvit Business Opportunity

The unfortunate reality of this business is that it is not easy to make money and very few people that get into it, or other similar mlm’s for that matter, make good money. The way their compensation plans are set up in a pyramid mlm structure make it so that those on the top make all the money while those at the bottom make little.

I was actually able to find an official income disclaimer from Pruvit that states that the annual gross income of Pruvit distributors is projected to be $500 – $2,000 as you can see here….

This can be a good business opportunity if you think you would be good at recruitment. If not, then not so much. Many people are seriously mislead from other distributors recruiting them in with tricky and deceptive tactics that are misleading.

If you can recruit like a madman then go for it but if you don’t have the salesperson type personality for this may not be your best choice.

Questions, comments, concerns??? Leave them below in the comment section and I’ll get back to you soon 🙂